"Endometrial carcinoma recurrence according to race and ethnicity": Q&A with Dr. Ashley Felix 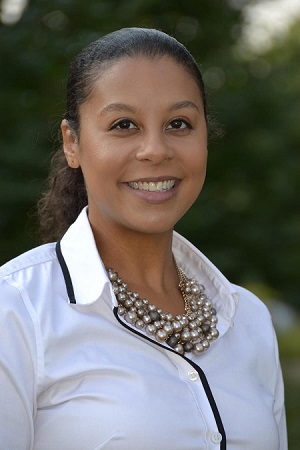 Dr. Ashley Felix is an Assistant Professor at the Ohio State University College of Public Health. Her research focusing on identifying which factors put people at risk for different endometrial cancer subtypes, and what we can do about these factors. She also researches the molecular mechanisms of these relationships. Her work has specifically focused on women diagnosed with aggressive endometrial cancer, which is characterized by racial disparities.

Her most recent article - "Endometrial carcinoma recurrence according to race and ethnicity: An NRG Oncology/Gynecologic Oncology Group 210 Study" - is about recurrence of endometrial cancer, and differences by race and type of cancer. It is discussed in the Q&A below.

Non-Hispanic black (NHB) women are more likely to experience an endometrial carcinoma (EC) recurrence compared to non-Hispanic white (NHW) women. The extent to which tumor characteristics, socioeconomic status (SES) and treatment contribute to this observation is not well defined. In the NRG Oncology/Gynecology Oncology Group (GOG) 210 Study we evaluated associations between race/ethnicity and EC recurrence according to tumor characteristics with adjustment for potential confounders. Our analysis included 3,199 NHW, 532 NHB and 232 Hispanic women with EC. Recurrence was documented during follow-up. We used Cox regression to estimate hazard ratios (HRs) and 95% confidence intervals (CIs) for associations between race/ethnicity and EC recurrence in models stratified by histologic subtype (low-grade endometrioid, high-grade endometrioid, serous, mixed cell, carcinosarcoma, clear cell) or stage (I, II, III) and adjusted for age, SES, body mass index, smoking status and treatment. In histologic subtype-stratified models, higher EC recurrence was noted in NHB women with low-grade endometrioid (HR = 1.94, 95% CI = 1.21-3.10) or carcinosarcomas (HR = 1.66, 95% CI = 0.99-2.79) compared to NHWs. In stage-stratified models, higher EC recurrence was noted among NHB women with stage I (HR = 1.48, 95% CI = 1.06-2.05) and Hispanic women with stage III disease (HR = 1.81, 95% CI = 1.11-2.95). Our observations of higher EC recurrence risk among NHB and Hispanic women, as compared to NHW women, were not explained by tumor characteristics, SES, treatment or other confounders. Other factors, such as racial differences in tumor biology or other patient factors, should be explored as contributors to racial disparities in EC recurrence.

How did you come to research EC and specifically racial disparities?

As a minority woman living in the U.S., I have always been aware of racial disparities in various health outcomes. Early in my research career I became particularly concerned about the growing burden of endometrial cancer among black women. Although the number of new cases of endometrial cancer is growing among women of all races, black women have the highest rates of increase. Further, black women have higher mortality than women of other races.

What question were you trying to answer with this study and why?

We examined whether Black women have a higher risk of their endometrial cancer returning as compared to White women. We conducted this analysis because the literature on this topic was mixed and it is important to describe potential disparate outcomes.

What were your findings?

Our work is descriptive. Therefore, we need future analytic studies to examine why risk of recurrence is higher for Black as compared with White women. An understanding of contextual factors is needed to reduce poor outcomes experienced by Black women with endometrial cancer.

What does this mean for Black women with EC?

All women with endometrial cancer should make follow-up visits with their doctors a priority. These visits allow your doctor to screen for signs of recurrence and the sooner a recurrence is detected, the better the outcomes. Black women, in particular, may want to follow-up more frequently.

What do you see are the next steps in using this research to improve the outcomes of Black women?

Future research should focus on identifying the reasons underlying our observations. In order to improve outcomes of Black women with endometrial cancer, we will need to focus on the factors that  increase the risk of this cancer returning.