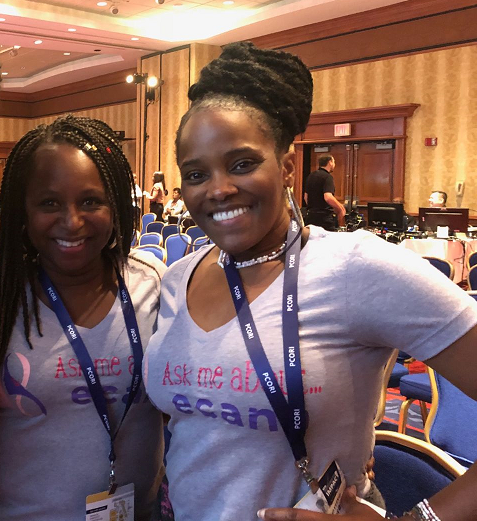 Two of ECANA’s patient advisor steering group members – Margie and Adrienne – were awarded an opportunity attend the Patient Centered Outcomes Research Institute (PCORI) national conference in October. The team is so grateful for their strong representation and awareness-raising of ECANA, and for gleaning so many critical lessons that will propel ECANA into meaningful engagement and research partnership as we grown. Read on for reflections from Adrienne and Margie about their time there!

As part of the ECANA steering committee and scholarship recipients, Margie and I had the opportunity to represent the organization at the Patient Centered Outcomes Research Institute (PCORI) 2018 IMPACT to EVIDENCE Conference in Washington, D.C. Though we see and speak to one another often through ECANA's monthly teleconference, the two of us live on opposite sides of the country and were excited to meet up for the second time after having both attended the SGO conference in New Orleans in March, 2018.  Having little expectation of what we would learn about PCORI on this trip, it wouldn't be a stretch to say our anticipated reunion quickly took a back seat to the invaluable world of patient engagement.

We were introduced to the term engagement through ECANA's PCORI award in 2017, so having the opportunity for the PCORI to expound on it further was rather exhilarating for the both of us. We participated in plenaries and breakout sessions where the running theme focused on the importance of listening to patients and caregivers as part of the overall care provided.  In all sessions, we heard that the theme of inclusion was not a novel idea, but the difficulty came in deciding how and when to apply it.

PCORI is exemplifying engagement by placing the ownership of research projects into the hands of those who the research is about, and who most need the research results to survive and thrive. In recognition that a patient's commitment to stay engaged is just as valuable as the study itself, conference sessions were very dynamic forums. Most panels were followed by discussants who were either caregivers, clinicians or patients.

One very dynamic three-time cancer survivor and panel discussant – let's call her GD - was influential in shaping our understanding of the challenge PCORI is trying to solve. We were particularly inspired by her. We learned that even those with rich history in healthcare advocacy can be overlooked in favor of standard clinical guidelines or research protocols, and how it takes a whole community and partnership to find common ground.

Overall, we gained a better understanding of how research is formulated, translated into action, and how it can better achieve its intended purposes. We learned – as we knew intuitively already - that patients and caregivers are imperative to the success of research from start to finish. Margie and I both agree that ECANA falls right in line with PCORI's vision. We look forward to one day presenting them with our own toolkits for flourishing Black women's cancer alliances – how-to blueprints that will be backed by the support and trust PCORI has invested into ECANA, and inspired by the wide-eyed amazement of two, long distance endometrial cancer survivors, Margie and Adrienne, who now call themselves close friends.

"Before I got here, I thought I was coming to hear a lot of doctors talk and every now and again they would day something about the patient. Boy was I wrong" - Margie Willis

PCORI is changing how doctors and the medical researchers communicate with their patients and family members in decision making – shifting toward asking the patient for their thoughts and away from quickly going about the regular protocol. It supports many research projects about health care and supporting the medical system and works hard to get the results of the many research projects into the hands of those who need it most (I.e., those affected by the condition under study.)

I really liked how PCORI is helping doctors talk “living room language” to patients and family members. Doctors tend to speak fast and use medical terms that are not familiar to patients rather than using familiar, colloquial words with a more relaxed pace.

The difficulty of engaging people of color in research projects is due to distrust, lack of availability of opportunities, and doctors who profile their patients as not wanting to be engaged. I believe ECANA is on the cutting edge of building a community relative to PCORI-funded projects.